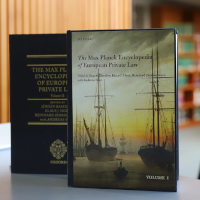 The “Max Planck Encyclopedia of European Private Law” first appeared in 2012 in two printed volumes comprising more than 2,000 pages and nearly 500 structured entries. Based on the Institute’s expertise in the fields of comparative law and legal history and with recourse to comparative material available at the time of its initial publication, the entries explored current developments and harmonization projects in all areas of private law. Since then, the Encyclopedia has provided an overview of European private law and served as a resource for academics, practitioners, and politicians alike. Particularly useful are references to pertinent norms, the case law of European and international courts, and further reading material. In line with its format as an encyclopedia, entries are grouped in alphabetical order, each including numerous cross-references to other entries.

Soon after its publication, readers and contributors pointed out that the encyclopedic format virtually demanded a re-edition in the form of an online tool. The publisher of the book, Oxford University Press, has kindly consented to such endeavours of the Max Planck Institute for Comparative and International Private Law, where the work originated. The result is “Max-EuP 2012”, and hopes are high that it will be appreciated as much as its German predecessor, the “Handwörterbuch des Europäischen Privatrechts” (HWB-EuP 2009). It is worth mentioning that each entry is linked to its counterpart in the German online edition and vice versa, thereby providing guidance for researchers and others who face issues of terminology and translation in the field of European private law.

The Max Planck Encyclopedia of European Private Law, published as a print work in 2012, has been made freely available in 2021 as an online edition at <max-eup2012.mpipriv.de>.

The materials published here are subject to exclusive rights of use as held by the Max Planck Institute for Comparative and International Private Law and the publisher Oxford University Press; they may only be used for non-commercial purposes. Users may download, print, and make copies of the text files being made freely available to the public. Further, users may translate excerpts of the entries and cite them in the context of academic work, provided that the following requirements are met: